Our patient had high ferritin which was detected on a routine blood test. Hyperferritinaemia is common and causes can usually be differentiated by history and clinical examination. Potential causes include:

How common is genetic haemochromatosis?

Most cases of genetic haemochromatosis (90%) are due to a homozygous substitution for G to A  at nucleotide 845 of the HFE gene – cysteine to tyrosine amino acid substitution (i.e. C282Y). Also a mutation at nucleotide 187 leads to histidine to aspartic acid at amino acid 63 i.e. H63D (homozygotes HFE H63D do not accumulate significant iron but compound heterozygotes C282Y and H63D can). In UK genetic haemochomatosis is:

The frequency of the C282Y mutation in the HFE gene is more common in Northern Europe. In UK 1 in 8 are carriers for HFE C282Y and 1 in 200-250 are homozygous. This map is taken from EASL Clinical Practice Guidelines for HFE Hemochromatosis 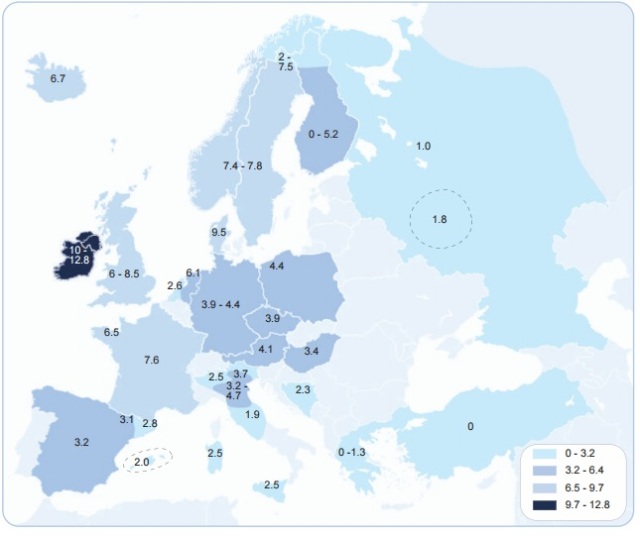 It is the commonest genetic mutation in Caucasians but less than 10% of homozygotes ever develop clinically significant iron loading. For this reason population screening is not advised. The mutation is maintained due to a possible survival advantage of heterozygotes. The phenotype depends on:

The mutation leads to reduced hepcidin leading to increased ferroportin and therefore increased iron absorption and increased iron storage. There is no easy way to excrete iron and when transferrin binding capacity is reached labile iron appears and taken up by cells leading to reactive oxygen species causing tissue damage.

Venesection is the mainstay of treatment, although it’s benefits have only been studies in retrospective case series. Start venesection when ferritin is elevated. Generally weekly venesection to aim for ferritin around 50 (some say less than 50); then move onto maintenance phase to keep ferritin 50-100. This generally consists of three to four venesections per year but can vary significantly. Iron deficiency should be avoided. Each unit of blood removes 200-250mg iron and generally 5-20g needs to be removed initially. Assuming there are no other contraindications patients with haemochromatosis can donate blood in the UK but their ferritin levels must still be monitored by a physician. Rarely patients may need a form of central access if venesection is difficult or iron chelation – if this is required then ferritin targets will change. Venesection reduces mortality from cardiac failure and liver failure/HCC. Patients may need fluids after venesection or during venesection to reduce risk of hypotension. Antihypertensives may need to be withheld on those days.

It is often difficult to have full dietary restrictions that may interfere with patients psychological well being, however the below would seem sensible:

A useful guide is given here from the Haemochromatosis Society.

Other forms of haemochromatosis are rare:

Counselling patients is important – genetic diagnosis have implications for life insurance etc. All first degree relatives should be tested. Guidance recommends ferritin/transferrin saturations and HFE genotyping. If patients are found to have HFE C282Y homozygosity but no iron loading then yearly monitoring of iron studies is recommended.

Online education and discussion about all things haematological
View all posts by TeamHaem →
This entry was posted in Related to other specialities and tagged ferritin, genetics, haemochromatosis, hyperferritinaemia, iron. Bookmark the permalink.
Loading Comments...
%d bloggers like this: