The first case, we started with something relatively straightforward:

This was a blood film of a 21 year old pregnant women who was anaemic.

Numerous elliptocytes are noted on this blood film.  The patient had been noted to be anaemic on routine pregnancy bloods.  Frequently, hereditary elliptocytosis is discovered by chance from a blood film, or a marginally raised bilirubin.  As suggestive by one of our followers, reviewing blood films of first degree relatives may be useful as the inhertiance is autosomal dominant.   HE is due defects in either the structure or quantity of the cytoskeletal proteins responsible for maintaining the biconcave morphology of RBCs. Mutations in either alpha- and beta-spectrin are most commonly responsible, but mutations in other cytoskeletal proteins (band 4.1 and glycophorin) are also described.

For patients with mild haemolysis, anaemia may increased during pregnancy, infections and folate deficiency.

Other causes of acquired elliptocytic or fragmented red cells need to be excluded including haematinic deficiency and MAHA.

Patients with haemolysis should be given folate replacement and supportive treatment during exacerbations of anaemia.  Splenectomy is only indicated in severe haemolytic anaemia.

A 40 year old gentleman present with the following FBC:

His bone marrow trephine is reviewed:

This patient was given a diagnosis of hairy cell leukaemia.  Typically blood counts will show a monocytopenia, and may have evidence of a pancytopenia.  Bone marrow aspirate is often unsuccessful, therefore trephine biopsy is essential.  Trephine biopsy typically demonstrates the “fried egg appearence” – the hairy cells typically have a clear zone surrounding, leaving plenty of room between cells.  Typically there is a diffuse interstitial infiltrate.   The reticulin is usually increased.  Agents used for immunohistochemistry include anti-CD20, annexin A, DBA44 and CD11c.  TRAP (tartrate-resistant acid phosphatase) can also be tested by means of a monoclonal antibody on the trephine biopsy.

It is important to appreciate there is also limited normal haematopoiesis on this bone marorw trephine, resulting in the pancytopenia demonstrated on the peripheral blood count.

This patient had a PSA of >3000, suggest metastatic protate carcinoma.  This trephine shows a diffuse infiltrate of non-haematopoietic cells.  Typically prostatic involvement is suggested by cribiform, microglandular pattern, with fibrosis and new bone formation.  It is essential to first note the lack of megaryocytes/erythroid islands/ and granulopoeisis.  The gladular pattern can be appreciated as weel as thickening of the trabeculae in keeping with new bone formation.  IHC can help confirm the diagnosis and stains for PSA, PSAP, and cytoekeratin markers are available.

Thanks to all our followers that also contributed pictures to our morphology week!

Cabot ring, stained with giemsa 7.2 – microtubular remnants of mitotic tubules that are involved in mitosis.  Cabot rings have been observed in megaloblastic anemia, lead poisoning, severe anemia, leukemia, myelodysplastic syndromes, and other cases of dyserythropoiesis 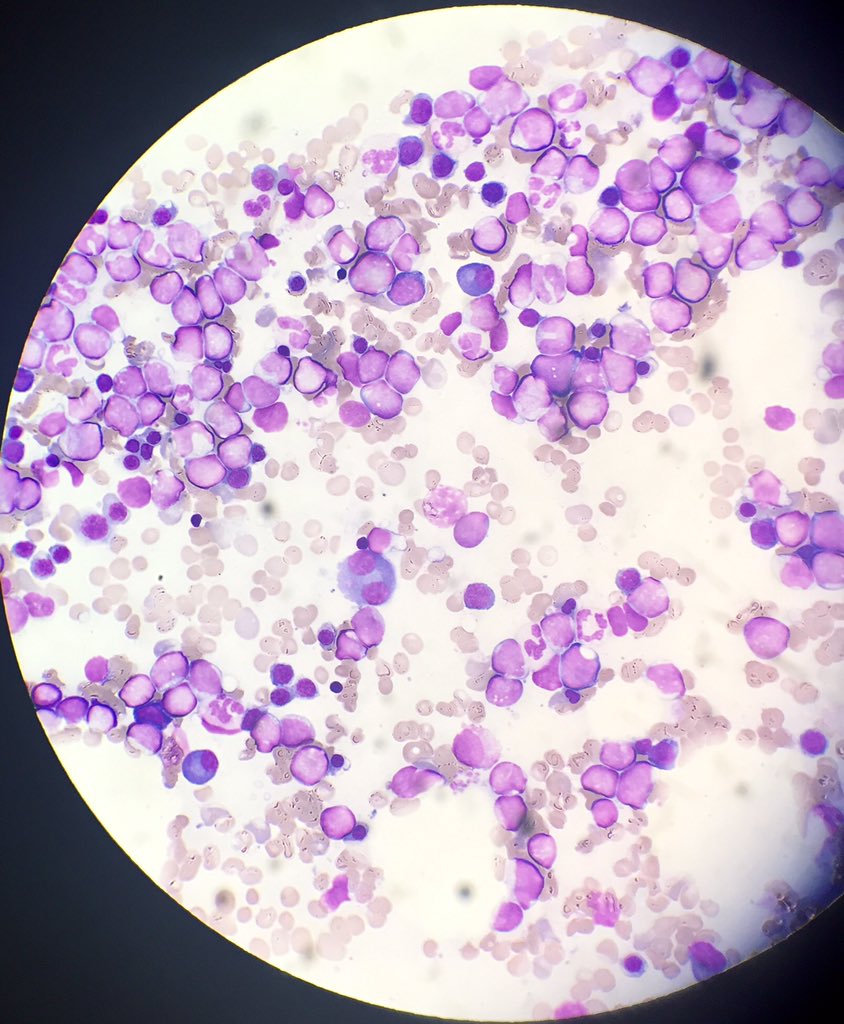 A case of dual pathology – AML and plasma cell dyscrasia.

We always welcome interesting pictures – so remember to tweet @teamhaem the next time you come across something of interest!

Join us again next week for another case!